At the corner of River Street and the Soquel Avenue Bridge, there is a serene walkway along the San Lorenzo River flanked with a beautifully and naturally planted patch of earth. This patch is the first completed “parklet” and was sponsored by The Rotary Club of Santa Cruz and designed and installed by ECI.

These areas are the result of the Adopt-A-Parklet program, which was launched in October 2015 by the Coastal Watershed Council (CWC) to enrich the San Lorenzo River in Santa Cruz. CWC works with local Santa Cruz businesses to sponsor individual parklet projects and provide volunteer staff to help plant and irrigate.

CWC, ECI and the City of Santa Cruz have worked together to complete the projects as well as maintain them by limiting the return of invasive plants and nurturing the reintroduced native plants. The City has been key in providing jurisdictional information on zoning limits and approved planting lists. ECI designs and prepares the ground for each parklet by removing invasives and then spreading mulch. ECI also oversees the planting process during the sponsor company work day.

Bilginsoy describes the project as a “reinvestment into the San Lorenzo River”—an ecological and esthetic restoration that will enhance recreational use. CWC is now working with Plantronics, another local business, to complete the second parklet.

Planting Day with the Rotary Club 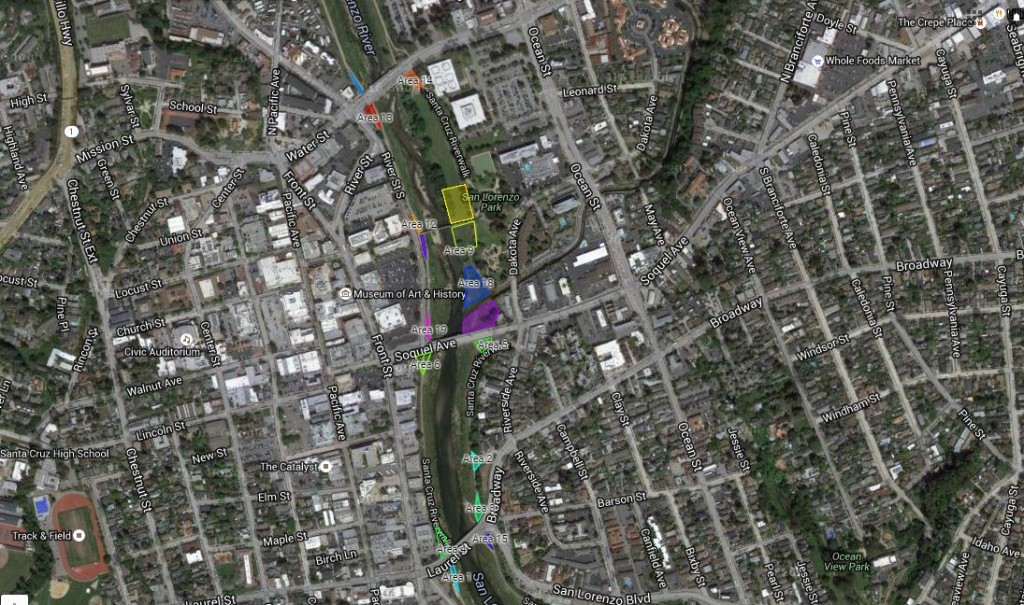 A satellite image of all the proposed parklets along the San Lorenzo River.